At the beginning of this century we witnessed huge ethical blunders on many levels—both business and personal.  Ethical decision making (or the decision to ignore ethics) has contributed to events such as the implosion of large corporations during a robust economy, and to the collapse of weaker firms as the economy turned sour.  To be sure, other factors were involved in almost every case, but ethics remained at the heart of the problem.

Defined most simply, ethics is “a system of moral principles.”  There are various fields of ethics and several iterations of ethics (depending on particular historical eras), but at the end of the day, ethics is still a moral issue, and oftentimes decisions are required to be made at a personal level. 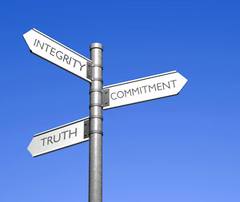 Below are six key questions that offer a basis for ethical decision making.  These were originally published in 1999 by Michael Rion.

Aside from the glaring examples we have witnessed, businesses make ethical decisions every day.   Reputations are built and lost on the daily ethical decisions that are made.  Reputable people seek to engage with others of like reputation and ethics.

Risk Managers are charged with identifying, analyzing, and mitigating their company’s exposure to risk.  From a risk management perspective, a good business ethics code will help protect your clients, your employees, your assets, and your reputation irrespective of your industry group.