Labor Minister Adel Fakeih, who opened the Work and Business Ethics Forum yesterday at Alqasr Hall of Hilton Hotel, said that a “charter of principles” has been prepared by his ministry that would go a long way in helping businesses while streamlining jobs and services.

Speaking in the first session of the forum, Fakeih said the charter has, in principle, ways and means of the working between the ministries, its officials, those receiving its services and society. The minister said the charter’s principles also include work ethics and how they were reflected in the behaviors of ministry’s officials whose performance has improved.

The ministry’s goal is to provide decent and attractive job opportunities for Saudis, and enable them to be outstanding in their jobs via creative development of the rules, mechanisms and incentives of the labor market, regulating the employer-employee relations and raise the level of social protection for all, he said. 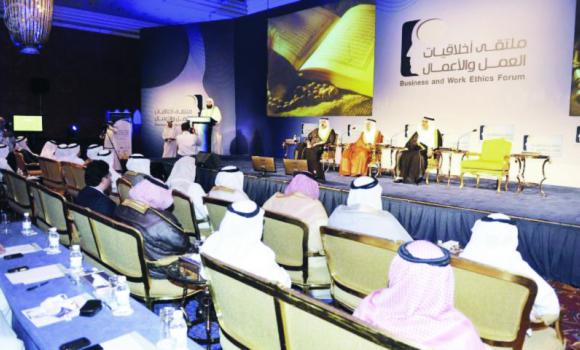 The forum’s Secretary-General Dr. Ehab bin Hasan Abu Rukba said the forum aims to stress the importance of strengthening the practice of ethics that stems form the heritage of the country among enterprises and inside the organizations themselves.

He said these ethics would help the business sector become more productive and consequently more competitive. Ethics are life skills people have to acquire in their social and professional lives, and an organization is a legal entity that is constituted of individuals who influence the soundness of its work environment with their behaviors and ethics, he said, adding that the forum is convened within “ethical changes” that are the result of the last economic crisis, and for “stressing some of the original ethics that are beginning to disappear.”

Ahmad bin Abdulaziz Al-Hamdan, head of the Social Responsibility Center at Jeddah Chamber of Commerce and Industry and also a financial and administrative consultant, spoke about the Chamber’s Code of Ethics, the first of its kind in Saudi chambers. He said the chamber’s code stresses complying to Islamic morals in business — honesty, solidarity, and preventing counterfeiting, monopoly, unjustifiable raising of prices and greed.

He added the chamber made “strengthening ethical commitment” a strategic goal, pointing out that it had established an Ethics Administration at the Social Responsibility Center with the task of calling for reviving work ethics at 30 businesses and strengthening values in those in charge of education.

“The aim is to strengthen the principles of dedication, justice, mercy, self control, courage, honesty, fulfilling commitments, sense of responsibility, respecting others, team work, positivity, openness toward other cultures and moderation,” he said.

Al-Hamdan added that it is important to have a system that governs the commercial-ethical relations between businessmen and another between them and consumers, saying that the idea of the chamber’s Code of Ethics is aimed at “bringing back what was present in the past and working on attracting big and small businessmen to adopt it as to start of a new era.” He said the center seeks to implement a concept of social corporate responsibility that is compliant to the values of Islamic morals and principles of solidarity (takaful) and based on international standards of corporate citizenship.

Saleh Kamel, chairman of Dallah Albaraka Group and chairman of the JCCI board, spoke in the third session about work ethics in the past, as well as the chamber’s project that stated the work ethics for 30 professions. He called for issuing a code of ethics.

The forum features more than 20 working papers and discussion sessions, in addition to a number of sideline meetings and events that will cover several topics.