Business won't be ethical until it shares society's values again

Companies too often operate in a bubble, detached from everyday life

Have we got the picture now? In banking it seems it’s entirely fine to twist an entire system to secure a commercial advantage, turn a blind eye to moving large amounts of dubious money without question, and, in your spare time, construct products that are so inherently unstable that they can bring down whole banks and economies. Damn the rest of us.

Oh yes, and, as if Barclays’ and HSBC’s antics are not enough, we find a large company like G4S can fail to fulfil a major commitment at a time of intense national pride and yet still collect their management fee from the taxpayer. Are we being mugs here? How much more can we take? Or have we become inured and accepting of corporate arrogance? 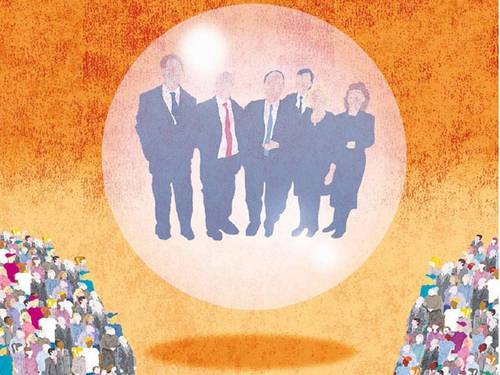 When the spotlight of inquiry falls on mismanagement the most we discover is “a Murdoch’s fork” – either management knew and was complicit, or else it didn’t and was negligent (shading to incompetent and unfit). Either way, the system seems to be that directors award themselves handsome pay-offs, their staff have a party and the rest of us pick up the bill.

HSBC told us last week that it “takes compliance seriously” – obviously – and it will restructure its governance and strengthen its culture. Of course it will. But so often the reality is that internal measures are superficial – a new ethics code and one hour’s sheep-dip ethics training for all (this is called integrity), a bit of extra reporting (called transparency) and a few new management faces (called cultural change) and, hey presto, you’ve “ticked all the boxes” and moved on. Goldman Sachs and JP Morgan, both hit by major “malfunctions”, still trundle on as banks rush back to business as usual. Who is kidding whom?

The key to unravelling this lies with the values of businesses, how they are applied – or not – in decision-making and the place of companies in the wider community. Companies too often operate in a bubble, detached from everyday life precisely because there seems to be no connection between corporate aims and those of the wider community. The Companies Act requirements, forged in a very different age, seem to provide cover for the single-minded pursuit of bottom-line performance and shareholder value. But this is how we choose to interpret them.

And so companies are let off the hook. We should be saying “just grow up”, but in fact we insulate companies from making difficult choices: regulation tell firms what to do and so there is no need to think for themselves. This is a kind of laundering of conscience; if it’s legal, it must be all right. Increasing the size of rulebooks therefore makes this culture of dependency worse and often focuses attention on minimum standards. In the same way, the deferring to the mantra “the market will decide” is a similar cop-out. The market of itself is capable of deciding nothing.

The solution lies in a number of steps that explicitly focus on building a corporate maturity and bridging a connection between corporate aims and broader social objectives. First, we should be looking at new types of rule-making much more seriously, based on defining desirable outcomes and ethical principles, rather than proscribing detailed, often meaningless process. The UK, and indeed the Financial Services Authority, has world-leading experience in this area, if we only recognised it and understood how to apply it.

Second, corporate governance needs some serious work. We need non-executive directors (NEDs) to do their job without fear or favour. This means being unrelentingly challenging in the boardroom and instigating quality challenge processes throughout organisations. Only then will independence and accountability really mean something and the “Murdoch fork” diminish.

FTSE100 governance standards are relatively high globally. But the UK Governance Code, sound as it is, is not taxing to work around and the way it is applied often allows companies to fail to comply if they can offer some explanation in their annual report.

In addition, “good governance” requires quality NEDs drawn from all walks of life. In Ireland the financial regulator, Matthew Elderfield, has been able to be pretty brutal in clearing out directors who were around in the crash of 2008 – and, by implication, not up to it. He may have the luxury of an even more ravaged landscape than ours on which to rebuild, but lessons could be learned.

Third and more radically perhaps, is the concept that real responsibility comes from a new connection with wider society, not just a tokenistic splurge of corporate philanthropy. In the long-term boards need to want to be ethical for themselves. They can act ethically to comply, keep campaigners quiet or for good PR, but none of this is ethics – it’s profitability dressed up as something else.

Which is not to say being more ethical and responsible won’t be positive in many financial ways, I am sure it will – in building customer trust and confidence, encouraging staff allegiance, providing a marketing edge and also, rightly, reducing regulatory compliance costs. But if these are the only reasons the sophistry will be transparent and the edifice will crack. Unconditionality must come into it somewhere and this means being prepared to suffer cost and pain. In this respect whole bodies of shareholders may need to be educated to understand what constitutes a reasonable return – and for whom.

For this to happen we need to create space for ethics – space in the sense of deliberate “gaps” in regulations and also in the sense of making ethics part of everyday consideration – not an uncomfortable add-on. There are useful frameworks out there – The 21st Century Charter and The Ethics Mark are good examples. Both show that committing to an ethical position shows connection with community and a willingness to learn and take the consequences. Maybe then decisions can be said to be taken in good faith; and faith in the corporate world can start to be rebuilt.

David Jackman is the director of The Ethics Foundation. He was head of ethics at the Financial Services Authority until 2003