The Ethical Component of Business

Business owners face many struggles on the road to success. They must make decisions on a daily basis that could alter the likelihood of survival in today’s market. Some of the decisions are straight forward in nature and include things such as the business product or service, location of operation, the size of the target market (local, national, global, or other), and identifying sources of capital. Each of these decisions forces business owners to weigh pros and cons regarding benefiting the business, shareholder needs, legality issues, geographic concerns and other easily discernible matters. The decisions that tend to be more difficult in nature are the same decisions that seem to offer less formal guidance. These decisions involve ethics of business. Business owners at one time or another are often forced to identify a code of ethics for application in their daily business operations. Typically, at least some part the code of ethics designed for the business will vary from an individual’s personal ethics. A code of ethics is necessary for business owners and their employees to ensure everyone knows and understands which behavior is acceptable as right and wrong as it pertains to the individuals and the business as a whole. 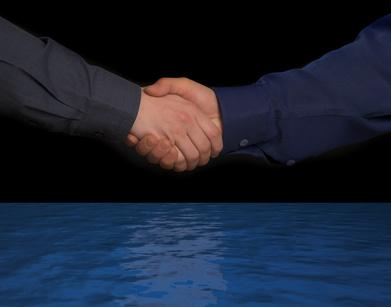 The idea of good ethics is generally expected in the business landscape of the United States. A popular term used in conjunction with the idea of good business ethics is accountability. Accountability refers to the fact that every “person is responsible or answerable to someone.” (Robinson, 2009  Another common term with regard to ethics is liability. Liability insists that every person “is responsible for something or someone.” (Robinson, 2009) By looking at these two terms, the importance of good business ethics can be identified as something that affects coworker-manager relations, as well as customer-client relations. Because ethics can involve so many relationships in business, practicing ethics that support a prosperous business is essential.

When managers have employees behaving unethically or opposing behaviors that “enjoin virtues of honesty, compassion and loyalty” (Velasquez, 2008) the resulting internal conflicts could cause disruption to the organizational culture and overall productivity. Personal conflicts among co-workers and trust issues with management could hamper workflow and communication. Likewise, unethical behavior involving customers and the business could result in lost sales, lack of referrals, and cancelled accounts. Information from the Mark Kula Center for Applied Ethics at Santa Clara University indicates that often customers who feel they are being treated unfairly or feel that businesses are withholding vital information and keeping secrets believe that unethical behavior is occurring. Additionally, questions of morality and suspecting a business or one of its representatives is doing something immoral can lead to questioning whether good business ethics of an organization are wavering. (Velasquez, 2008) An example of wavering business ethics involves Baltimore Mayor Sheila Dixon who was recently convicted for “fraudulent misappropriation for improperly using several hundred dollars in gift cards,” as stated in The Wall Street Journal. (McKinnon & Radnofsky, 2009) While the conviction obviously indicates a violation of law, the ethical concerns of the situation are overwhelming and common. Government officials, law enforcement, and any public servant who works in a position of authority and accepts a gift of monetary value can expect to be faced with questions regarding ethics. One of the primary concerns is favoritism to whoever provides the gifts. (Davis, B, 2009) The gifts can be in exchange for anything to include fixing a ticket, awarding government contracts for various products and services, ignoring legal infractions, providing jobs, influencing decisions, and appointing certain individuals to positions of authority in the community. Financial gain seems to be one of the most prevalent ethical battles in America today. In a struggling economy where unemployment is quite high (www.bls.gov/lau/) it should not be a surprise that where ethical concerns exist, it usually revolves around money. In the case of Mayor Dixon, money was a major component and motivator in her case.

Although financial issues are often part of ethical cases, other matters can be involved as well. These often vary by occupation. For example, in construction, substandard materials may be used because they happen to be available at the right time. In the medical field, patients without health insurance may be required to pay higher charges for the same services as those with insurance. In retail, managers may make a 0 purchase to meet their monthly quota or win a contest, only to return the item later. In an office, an employee might work on company time and utilize company resources to do work for their second employer. These instances are just a few of the unethical possibilities that can occur in business. Because of the potential for unethical behavior in so many places, businesses should clearly define what is acceptable and unacceptable. This code of ethics, as I named it earlier, should be detailed and include examples for clarity. For instance, employees may not be permitted to spend more than on any gift for a manager. Employees of state and local governments may not accept gifts from affiliates valued over . Employees may use company equipment for limited, personal use, not to exceed a value of a month and only on personal time. Managers may not inflate their sales by making purchases and posing as customers. The code of ethics each business should create needs to be specific for that business and cover any conceivable situation. All employees should then be made aware of the ethics, provided training, and annually updated on all ethical business practices.

Business ethics is an unavoidable issue for any organization operating in the United States. Additionally, ethical beliefs can vary globally and businesses that operate in other cultures need to address the best ethical practices in those environments as well.  Ultimately, best practices and ethical standards for any business should be reflected by the behavior of each employee as outlined by the organizations they represent.  In so doing, fair treatment, “honesty, compassion, and loyalty” (Velasquez, 2008) will hopefully keep cultures at work productive and customer relations profitable.

This article originally appeared on businesspeak