This Friday February 15th, the Yale Law and Business Society and the Yale Law School Center for the Study of Corporate Law will host Yale’s inaugural Global Business Ethics Conference. The conference’s programming will examine thinking about business ethics in a variety of contexts, including natural resource extraction, emerging market growth, and the financial crisis. 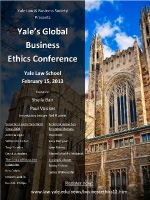 The day will open with remarks from renowned economic sociologist Neil Fligstein of California Berkeley, who will speak about perverse incentive structures leading up to the financial crisis of 2008. It will then move to a panel in which SEC Commissioner Troy Paredes will discuss securities law enforcement since 2008 with David Anders, a Wachtell Lipton white collar defense attorney, and others. The second panel focuses on the ethics of extractive industries and will feature Ernesto Zedillo, Chair of the Natural Resource Charter, in dialogue with Ken Cohen, Vice President of Governmental Affairs at ExxonMobil and others.

After our keynotes, former President of the Hewlett Foundation Paul Brest will discuss emerging market growth with Lynn Roland, general counsel of the Acumen Fund and other panelists. The conference will close with a dialogue between James Wolfensohn, former President of the World Bank and founder of Wolfensohn & Co., and Bobby Shriver, founder of DATA and (PRODUCT)RED.

For more information, contact Robert Borek at robert.borek@yale.edu or visit the conference website. The conference is free for Yale students and faculty, and is also open to the public. You may register online at the website no later than 11:55 p.m. on Wednesday, February 13th.

This article originally appeared on law.yale