Code Compliance fails to do its job, grand jury says

“Designed for disaster,” was the phrase used by Calaveras County’s Chief Building Official Jeff White in regards to the high volume of code complaints the Building Department addresses regularly. 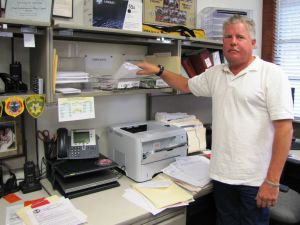 Findings from a newly released interim Calaveras County Grand Jury Report describe an understaffed department dealing with hundreds of backlogged complaints. The delay that comes with addressing the complaints allows code violators to “play” the system, often facing no timely enforcement of fines or levies when projects are found to be non-compliant, the jury said.

The grand jury conducted a department investigation after receiving a citizen complaint about the department’s lack of “diligence” in pursuing non-compliant and unpermitted business and residential construction.

For White, the news is nothing new to him or the county’s two code compliance officers, Todd Barr and Courtney Minehart. Since two former officer positions were cut in 2009, the mountain of complaints has been steadily increasing.

“It’s really like trying to paint the Golden Gate Bridge with a Q-tip,” said White. “The numbers can’t work. We literally do not have enough staff to process the workload. Clearly, it’s a problem.”

The department, which receives about 100 new complaints on an annual basis and has a staff of nine, has only two code compliance officers responsible for administrative work and the enforcement of zoning, building and health and safety regulations across the entire county. According to the report, the “backlogged non-compliance workload is far too great for the current two officers.”

Barr and Minehart deal with a variety of complaints, each of which has to be officially filed and prioritized before being investigated.

“There’s never going to be an end to complaints,” said White. “Everything under the sun ends up under code compliance and therein lies part of the problem.”

“Everything under the sun” can range from addressing debris and garbage issues, people squatting in foreclosed homes, illegal methamphetamine labs and indoor marijuana grow operations, and puppy mills to signage complaints, unpermitted construction and illegal camping.

Once a complaint is received, the department issues letters to the violator to request compliance – typically within 30 to 60 days. If noncompliance is found while an officer is in the field, a “red tag” citation is issued requiring all building activity to cease. After being notified, fines can be issued. If not paid by a specified deadline a lien can be applied to the property tax bill or deed. Fine objections are heard by the Assessment Appeals Board.

Calaveras County’s two officers typically handle between 60 and 70 cases simultaneously, similar to other California counties, according to the report.

In its findings, the Grand Jury recommended hiring an additional code compliance secretary or clerk to assist with handling complaints and managing databases to allow the current officers to focus on backlogged cases.

The report suggested that the funding for this position be drawn from existing code compliance section revenue –permit fees, fines imposed on non-compliant projects and liens places on property tax bills and deeds – described as a “cash cow” for other county funding needs.

Also recommended was the establishment of an automatic monitoring and follow-up system that would provide alerts when critical deadlines approach and to ensure that fines and taxes are imposed and levied on time which, according to Barr, is being addressed with the rollout of a new software system designed to streamline such issues.

Responses to the jury’s findings are required from the Building, Information Technology, Assessor’s departments and the Board of Supervisors within 90 days.