It appears that the caretaker government is also following in the footsteps of the previous government in disobeying the Supreme Court orders as so far it has not complied with the apex court order regarding promotion of victimised civil servant couple despite its ruling for necessary action before sunset on Friday. 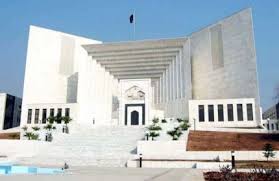 “It appears to be a typical case of political victimisation, where even a moment’s delay could cause irreparable harm and immeasurable loss to the officers whose merit lacks intercessional props and pillars. We have, therefore, no alternative but to direct the secretary Establishment to convene a meeting for HSPB DSC for passing an appropriate order after considering the aforesaid officers for promotion to the next higher scale but before the sunset today,” the court said in its order on the petition of two government officers namely Hassan Waseem Afzal and his wife Farkhanda Waseem Afzal against being posted as OSDs.

On Friday, a three-member bench of the Supreme Court headed by Justice Jawwad S Khawaja resumed hearing of the case regarding government officers performing duties as OSDs. Hassan Waseem Afzal told the court that he and his wife were subjected to political victimisation for last five years and without informing they were retained as OSDs without any logic.

The husband and wife, both of them senior officers, had sued the government against the decision of placing them as officers on special duty (OSDs) in the spree of political victimisation. The two officers in grade 21 were posted as OSDs by the Establishment Division since June 16, 2008 and 15-11-2011, respectively.

The court also observed in the order, “This prima facie constitutes a violation of the judgment of this court in constitution petition No 23/2012 (Anita Turab versus Federation of Pakistan). We have noted that the two officers Hassan Waseem Afzal and Farkhanda Waseem Afzal had been made OSDs since 2008 and 2011, respectively. We had therefore directed the secretary Establishment Division and secretaries of the said division since 16-6-2008 to submit their concise statements setting out their reasons as to why the aforesaid officers were made OSDs and why they were not given substantive postings.”

This article originally appeared on thenews