Risk Management Solutions has unveiled a new, open platform it says will enable insurers to manage models and exposures in minutes rather than months. RMS(one) revealed to clients this week at the firm’s client conference, Exceedance, after four years of developing the cloud-based product set to launch in spring 2014. 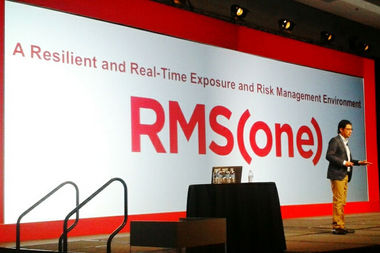 CEO Hemant Shah took to the open stage May 8 with three large screens behind him to the sound of Talking Heads’ “Once in a Lifetime” and began to tell attendees in the large, packed conference room just how he got here.

In fact, it was May 8, 1989 at a conference in Honolulu when Shah, then 23 years old, says he gave the first demo of his first product—a model on earthquake risk limited to Los Angeles, San Francisco and San Diego.

And after demonstrating the functionality of RMS’ proprietary analytic operating system (AoS) he says will “absolutely crush latency,” improve efficiency and liberate data for decision-makers at every level of an organization, Shah said, “I’ve wanted to give that demo for 24 years.”

According to its executives, RMS(one) will streamline the modeling, underwriting and portfolio management processes of insurers and reinsurers by making it possible to integrate existing RMS models with the proprietary models of the users, as well as from other modelers—all within the private RMS cloud.

In other words, the platform was designed to allow risk takers to be even more sure when asking themselves, “Am I right; am I wrong?” (To borrow another lyric from Shah’s intro.)

An executive, for instance, is able to work in the system from a iPhone or iPad and run a complete scenario of a book of commercial business within multiple subsidiaries in various regions against RMS’ North American hurricane model (or any of its available models)—and have it in the time it takes to go get a cup of coffee, as demonstrated live by Philippe Stefan, chief technology officer.

The results screen is packed with color-coded data, and permits the user to “drill in to see patterns that may warrant additional investigations,” said Shah.

Immediately following the demo, RMS announced multiple third-party partnerships—insurers and modelers who have agreed to integrate their models into this single platform to unify what once was scattered and fragmented exposures in disparate databases.

Among them are ERN, which provides models for earthquake and other perils in Latin America; JBA Risk Management, which is particularly known for modeling flood in the United Kingdom; and Risk Frontiers, a center specializing in natural hazards in Australia and Asia Pacific.

Munich Re, Aspen, Scor and Argo have agreed to partner with RMS in this endeavor by allowing users to migrate the output of each company’s proprietary models into RMS(one).

“As an industry, we need to access catastrophe models from multiple providers to develop a more complete and rigorous understanding of risk, resulting in greater depth of insight into our exposures,” said Aspen Re CEO James Few, in a statement. “However, the practical costs and constraints associated with running multiple modeling systems are a major obstacle. We would welcome more organizations also making their models available on RMS(one).”

And in what may be the most surprising partnership announced at the conference, Paul VanderMarck, chief products officer, said catastrophe modeling competitor Eqecat is on board and will share its data scheme. Users of RMS(one) will be able to export the data to Eqecat, run the model, and bring the results back to RMS(one).

“What else can be built over time?” VanderMarck added. “We will never have all the good idea, but we’ve made available a broader array of capabilities.”

Shah said RMS(one) gives insurers and reinsurers the ability to do what they’ve been wanting to do—make the model their own.

“They can make informed decisions—your own view of risk—based, not driven by, these models,” he said. “And instead of running it once a year, you can do this once a quarter and generate a report, making better capital and capacity choices.”

Shah said RMS’ existing catalogue of models is not changing but he expects, over time, to deliver new high-definition models to look at risk on more granularly.

Clients chose when and how to use RMS(one), Shah said.

Model-licensing remains the same. Updates to the RMS models will be in both RMS(one) and the firm’s other software platform, RiskLink, through 2016 and RMS will support RiskLink until 2019.