Following Kathryn Brooks’ post on Resource Nationalism in Zambia, Ellen Morgan explores another aspect of the growing debate over resource management in Africa: corporate social responsibility (CSR). Here, she highlights the opportunities and dangers that CSR programmes could hold for democracy in Africa. Ellen Morgan is a Policy Analyst at National Resources Canada. The opinions expressed here belong to the author and do not necessarily reflect the views or policies of the Government of Canada.

Recent attempts by African governments to ensure greater returns from resource development have provoked emotive responses from those on the left and right of the ideological spectrum. As politicians and economists revisit the debate on the role of the state in te economy, extractice companies are responding to the perceived ‘threat’ of resource nationalism with their own strategy: Corporate Social Responsibility (CSR). Although often dismissed as philanthropic indulgence or a public relations spoof, CSR presents a governance challenge that has important implications for democracy in Africa. 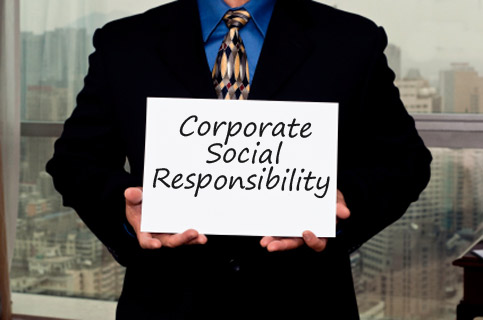 Emboldened by high commodity prices and growing demand, and spurred by the demands of an increasingly vocal electorate, governments across Africa have started introducing measures aimed at ensuring that a greater proportion of the wealth generated by resource extraction remains within their borders. While there appears to be little appetite for full-scale nationalization of the extractive sector or the unilateral nationalization of private corporations that we saw in Argentina earlier this year, many governments are implementing foreign ownership restrictions and placing greater taxation and royalty demands on foreign corporations.

In Ghana, Africa’s second largest gold producer, the government’s 2012 budget included an increase in the corporate tax rate for mining companies from 25 per cent to 35 per cent, and the introduction of a windfall profit tax of 10 per cent. The imposition of a similar windfall tax is being considered in Tanzania. Meanwhile, in Southern Africa, Zimbabwe and South Africa are seeking to promote greater domestic ownership of mining operations. Zimbabwe’s Indigenisation Law, for example, mandates that foreign-owned companies operating in the country transfer 51% of their ownership to black Zimbabweans. In a similar vein, a defining aspect of South Africa’s re-vamped Mining Charter is the Broad-Based Black Empowerment legislation, which stipulates that 26% of owners be Historically Disadvantaged South Africans by 2014. This is in addition to the high-octane discussions on nationalisation prompted by Julius Malema of the ANC Youth League. Elsewhere across the continent, examples abound of attempts by government to ensure more benefits from resource development stay within their borders.

Not surprisingly, such initiatives have re-ignited debates on the role of the state in the economy, and the merits of different forms of resource governance. Nor are these merely theoretical arguments. As Kathryn Brooks noted in her post on Zambia earlier last month, the debate on how to best capture the benefits of resource development is playing out differently in each country, with important implications for their long-term socio-economic trajectories.

To private corporations operating in the extractive sector, attempts to increase taxes, limit foreign ownership and promote in-country beneficiation are interpreted as a form of resource nationalism and thus a very tangible threat. Indeed, Ernst and Young characterized resource nationalism as a “contagion” and listed it as the top business risk facing the global minerals and metals sector in 2011-2012. Ever the proactive and innovative actors, corporations have responded to this perceived risk in a variety of ways, including Corporate Social Responsibility (CSR).

Broadly speaking, CSR can be defined as the actions companies take to integrate social, environmental, and economic concerns into their values and operations. CSR programs vary greatly in scope, from water and sanitation programs to adult-education and treatment for HIV/AIDS. Increasingly, such programs are being undertaken in partnerships with NGOs. While NGOs run the risk being accused of co-option by the private sector, direct partnerships between these seemingly unnatural bedfellows make pragmatic sense: NGOs have pre-established relationships on the ground and experience in executing community-based programs, while private companies are important sources of considerable capital in a world of constrained funding.

Reaction to the proliferation of extractive sector CSR initiatives in both the non-profit and private sector has been mixed. For some, it signifies an important first step in a much needed re-calibration of business culture into a more ethical model. Others dismiss it as a public relations spoof or echo Milton Freidman in stating that, ‘the social responsibility of business is to increase its profits.’

But in these debates over the validity and value of CSR, the challenge they can pose to democratic development is often overlooked. Through their CSR programs,  non-state actors (companies, and in some cases NGOs) provide services in areas like education, health and the environment that are often considered to lie at the core of  a democratic state’s social contract with its citizens. The concept of holding corporations responsible for contributing to the societies in which they operate is both morally and politically attractive. However, by displacing accountability for the provision of social services or environmental protection from governments to companies, such initiatives also risk inhibiting the formation and solidification of a democratic social contract between the state and its citizens.

The proliferation of CSR illustrates a transformation in the expectations being placed on corporations by the societies in which they operate. In particular, their need to obtain a social license to operate. But it is no panacea. At the end of the day, corporate social responsibility is based on favour and philanthropy, not duty and obligation. Corporations may be responsive to local needs, but they need not be. Ultimately, there is no substitute for a democratic government and an active citizenry, and too great a reliance on CSR risks diverting attention and energy from the importance of developing a sound governance regime.