Of course, the answer is they can’t do business with you. Building a reputation increases your credibility and visibility. While advertising and marketing generate awareness, they don’t build your street creds.

Be an outspoken, assertive advocate for small businesses; be a change-agent. That does build street cred.

For more about the importance of making yourself known, check out  3 Ways Women Can Brag About Their Companies. 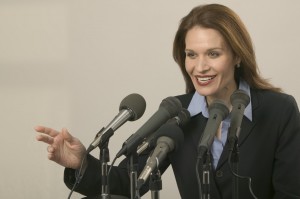 Karen Barbour,  president of The Barbour Group co-chairs state committees, testifies in Congress, and serves on her local economic development committee. Her business is providing surety bonds to contractors and much of it involves government contracts.

“My industry needs to change,” Barbour says. “Small businesses need to wake up. She has advocated for change in everything from the way small business credit scores are dinged when they seek bonding from multiple companies to making government agencies unbundle contracts so small bidders have a better chance.

She is particularly adamant about how women are treated when starting businesses, often with a credit score harmed by divorce or having no track record because they relied on their husband’s score.

“We need big businesses to hear our voices,” she says, citing the Dr. Seuss story of Horton Hears a Who, in which a chorus of united small voices made change happen.

Her outspokenness, her presence on government committees, and her testimony have made her business and her values well-known. The company has become nationally known as a knowledgeable and creative broker. Barbour was an Ernst & Young’s 2009 Entrepreneurial Winning Women. She was named 2008 Maryland Small Business Person of the Year by the U.S. Small Business Administration (SBA) – the first surety agent to receive this SBA top honor. Recently, Barbour was honored as one of The Daily Record’s 2010 Innovators of the Year.

Is that good for her business? Yes, The Barbour Groups was named one of Inc. magazine’s 5,000 fastest growing private companies in the U.S. four years running: 2008, 2009, 2010, and 2011, when it posted a three-year growth rate of 45%. The company is also a three-time recipient of Maryland’s Top 100 Minority Business Enterprise (MBE) Award.

For more about getting to the top, see  3 Ways Women Can Push Through the Glass Ceiling.

Exceptional as she may be, Barbour is not an exception. Colleen Molter has also found that what goes around, comes around. She is president of QED National, an IT staffing company, and 2011 Enterprising Woman of the Year. Her company has been one of Inc.’s 5000 fastest Growing Private Companies in 2009, 2010, and 2011, when the company’s three-years growth rate was pegged at 62%. The company was also named one of the Top 100 Woman-Owned Businesses in New York for 2009 and 2010 by Diversity Business.

So Molter and her company are doing quite well, with a financial sector customer base. But that wasn’t always the case, The vicissitudes of the financial sector in the late ‘90s, combined with 9/11 and its aftermath took her business down but now QED comes to mind when people want a solid small businesses in New York City IT staffing that can work with the government.

“I have a public service heart and a strong capitalist side,” Molter says. Part of her focuses on running her business, employing people, and making money. But her “give-back side” speaks out to help women business owners who are trying to do business with the government.

That advocacy began in the late ‘90s when she served on the Public Policy Committee the National Association of Women Business Owners. She is still fighting to reduce the paperwork and other obstacles to working with the government. And she helps women business owners understand how to do that upfront work, how to be sure they deliver on time and are paid promptly.

She has testified at City Hall, an experience that served her and her business well. “Folks in government who wanted to do better by women and minorities got to know me. I was a voice representing them; that gave me credibility,” she says.

She has chaired committees, which was a valuable lesson in facilitation skills, and works with the Manhattan Chamber of Commerce’s mentor program. “We are establishing ourselves as a leader,” she says. “Government folks recognize us in IT [staffing]. They understand more about us.”

That understanding makes QED a brand recognized for quality and thought-leadership.

Most fulfilling has been a course she teaches in the Bronx, a course on how to run the daily operations of a business. The students are underprivileged minority women with whom she discusses such things as how to handle a big order and how to restructure as you grow.

Her senior staff also serve on state committees, which has made the company known in Albany, which is another government contracting market.

Although not her motivation for doing them, advocacy and giving back have built her public profile and enriched her life. “The work you give back can build your presence. We were unknown in Albany. This is putting us on the map,” she says.

By stepping up and speaking out, by caring about others, these women have strengthened their own businesses and enriched their own lives. What a great way to grow!