When you see “ethics” in a headline, it’s usually because of some type of wrongdoing.

But ethics is much more than not getting caught with your hand in the cash drawer, an expert says. 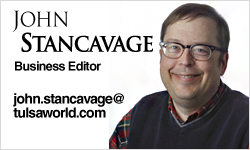 “Being ethical also involves doing things that help our businesses or enrich our friendships – things that bring out the best in ourselves,” said Bruce Weinstein.

Weinstein is also known as “The Ethics Guy.” He has written seven books and is a frequent guest on national news shows.

He will visit Tulsa Sept. 27 to speak to the Oklahoma Business Ethics Consortium.

In an hour-long phone interview, Weinstein told me ethics in the workplace includes such concerns as treating people well, respecting their need for a work-life balance and rewarding top performers.

Some businesses may not think these matters fall under the topic of ethics, but Weinstein contends they do.

“I didn’t come up with these ideas,” Weinstein said. “We have known about them for more than 5,000 years. Every religious tradition in the world teaches them, as do parents in every country. Without them civilization would be impossible because there would be nothing but chaos everywhere.”

The author says that fear, anger or other negative emotions often keep us from following those principles.

“It’s sometimes difficult to get back to where we want to be,” he said. “For example, how often do we really keep ‘Do no harm’ in mind during our daily interactions with people? If a co-worker is nasty to us, aren’t we tempted to return the nastiness and tell ourselves, ‘Serves them right?’ ”

Respecting others, the expert says, can extend to being civil in work conversations. Being fair includes both the employer refraining from consistently overworking an employee and the staff member not calling in sick when not really ill.

Being ethical is also more profitable. A happier workplace has less turnover, is more productive and fosters the kind of extra effort and creative thinking that sets a company apart, Weinstein said.

“Studies have shown that companies that treat their employees better tend to prosper,” he said.