Are ethics in business still important?

In April, Walmart, the world’s largest retailer, was accused in a scandal in which the former CEO of its operations in Mexico allegedly orchestrated $24 million in bribes to Mexican officials to streamline construction projects there. 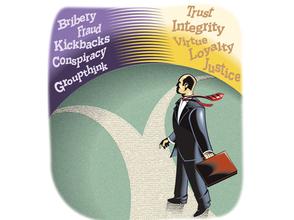 In July, Duke Energy Corp.’s shareholders filed a lawsuit and regulators started an investigation after the board of the nation’s largest electric company pushed out the company’s CEO only hours after a merger with Progress Energy closed. Angry shareholders alleged in the lawsuit that investors were misled about who the CEO would be.

Since August, two major global banks, HSBC and Standard Chartered, have been embroiled in a scandal involving money laundering from Iran, Mexico, Russia and Syria.

With all this coming after the mortgage-market meltdown and a lengthy list of other high-profile scandals of recent years, it’s enough to make one wonder whether business ethics are in their worst state ever.

Not really, some observers say.

From the tulip mania of the 1600s to the financial fraud that gave rise to the term “Ponzi scheme” in 1920, deception, excess and human frailty are constants in the business world.

“I started teaching ethics in 1994, and at no time in the last 18 years have I struggled to find content for the class, out of current case studies,” said Richard Coughlan, associate dean of the Robins School of Business at the University of Richmond.

What seems to be different now compared with the business scandals of earlier eras are the higher financial stakes involved and the intensity of media scrutiny, Coughlan said during a panel discussion on the state of business ethics at the school in August.

* * * * *
Two reports this year by the Ethics Resource Center, a nonprofit group based in Arlington, show some positive trends in workplace ethics, but also reveal that much work remains to be done.

About 45 percent of U.S. workers — 62 million people — witnessed some type of misconduct in the workplace in 2011, according to one of the reports. That was down from a high of 55 percent in 2007, and it was an all-time low for the survey, which the center has done since 1993.

The number of workers who witnessed misconduct was higher, at 52 percent, for the Fortune 500 companies, the largest publicly traded U.S. companies by revenue, according to the other report.

However, about 22 percent of the people who reported ethical violations said they experienced retaliation in the workplace. That’s nearly 9 million people, and up from 15 percent in 2009 and 12 percent in 2007.

Another negative trend: About 13 percent of workers reported they had felt pressure to compromise standards or policies, or even break the law, the highest level since 2000.

The report not only highlights the issues businesses face in maintaining an ethical workplace, but also “the struggle of the individual employee who witnesses wrongdoing,” Coughlan said.

Federal securities class-action lawsuits also decreased about 6 percent in the first six months of 2012 compared with 2011, according to a report by Stanford University Law School and Cornerstone Research.

And as of the end of 2011, the FBI reported that 725 cases of corporate fraud the agency investigated were pending nationwide, compared with 661 the year before and 529 in 2007, when the financial crisis was starting.

* * * * *
Businesses can take a number of steps to ensure adherence to ethical principles.

For example, the Ethics Resource Center recommends that employers have clear mechanisms in place to prevent retaliation against those who report misconduct.

One is a compliance-based approach, which emphasizes rules and monitoring.

The other is values-based, in which the top leadership sets an ethical tone and clearly communicates the principles that should guide every decision.

“There needs to be some level of monitoring,” he said. “But generally speaking, the firms that only emphasize compliance really are not building loyalty in their workforce to some positive end,” he said.

Misconduct often starts with ambiguous demands from leaders without any guidance on how to achieve the goals, he said. In blind pursuit of those goals, it may become common practice to take shortcuts — or worse.

Ethical violations occur in a culture where “all that matters is the outcome, not the means,” Coughlan said.

Pressure from management to produce results and social pressure among co-workers are among the factors that lead people to take excessive risks or violate ethical rules, said Jodie Ferguson, assistant professor of marketing in the VCU School of Business.

Another factor that contributes to unethical conduct is a perceived time lag between decision-making and the resulting harm.

“If (a worker) knows that any harmful outcomes may not be for months or years later, then they may be more willing to engage in a potentially risky act,” she said.

“Distancing” between the decision-makers and the customers, employees or investors they serve also can contribute to ethical breaches.

Leading up to the financial crisis, for example, “the managers making decisions whether to accept excessive risk were putting distance between themselves and the people who might be harmed,” she said.

Although many organizations have adopted a set of corporate values that might be posted on their office walls, Robert A. Phillips, an associate professor of management at UR’s Robins School, advises students to look beyond that and “listen to what stories are being told” within an organization.

“Every organization has binders full of rules and regulations, but if you really want to know how things are actually run, I always advise my students to ask of the people they are interviewing with, what does it take to be successful here? Who are the most successful people in this organization, and what did they do to get there,” Phillips said.

* * * * *
On a much larger scale, shocks such as the 2008 financial crisis can send the whole society on a rule-making frenzy.

The economic meltdown prompted regulatory reforms, such as the Dodd-Frank Wall Street Reform and Consumer Protection Act, signed by President Barack Obama in 2010.

That law and others have drawn criticism from many angles, with some arguing the regulations don’t go far enough to prevent unethical and risky business practices, while others say they go too far, creating a burden on the good actors and stifling economic growth.

Yet laws and regulation can accomplish only so much in creating an ethical workplace, experts say.

Regulations are sometimes written to prevent what’s already happened, without anticipating future problems, and they might create unintended consequences, said Sandra Peart, dean of the Jepson School of Leadership Studies at the University of Richmond.

“We regulate so that something can’t happen in the future, but then people find ways to get around the regulations or take advantage of them, and those are the things that we don’t always foresee,” Peart said.

In some cases, voluminous and complex regulations can even attract bad actors to an industry, said Jonathan Wight, a professor of economics at the Robins School.

Ethics is more about culture than regulations, and Wight argues that businesses and business people get in trouble in part because of a philosophical misunderstanding of some of the ethical principles that have informed economics and commerce for centuries.

For one, Adam Smith, the 18th-century author of “The Wealth of Nations,” was no advocate of profit at all costs, Wight said. Though recognized as the founder of modern economics, Smith was first and foremost a moral philosopher, he said.

“Clearly, there is this idea that was rampant for a while that the invisible hand of Adam Smith meant that if all people had to do was pursue their own greed, then some better social outcome would result,” Wight said.

“So there is a big difference between being a greedy person and being a self-interested person who abides by the moral rules, in addition to legal rules.”

* * * * *
The study of ethics needs to be more heavily emphasized in U.S. education, said David Brat, chairman of the economics and business department at Randolph-Macon College.

Brat teaches a course in economic justice and social change, but he says his students often have little grounding in the major systems of ethical thought over the past few thousand years.

In his view, “the one source of economic growth is virtue.”

“It is not property rights, not law or resources, but virtue,” he said.

In business and economics, “it is important that we reclaim the ethical language, and say business should be morally good.”

Neither education, nor laws, nor regulations will put an end to all misconduct in business, Peart said. But what ethics education can do is make people think about how they might react when posed with a dilemma.

For example, which is more important: loyalty to one’s colleagues, leaders and organization, or adherence to a moral code?

“Loyalty is a wonderful attribute, and it allows many things to happen that need to happen,” Peart said. “You would not want to have a world in which there is no loyalty.”

“But there is a line,” Peart said. “Students need to know where the line is. They need to have thought about it in advance. Where is the point, or the line, over which I am not willing to go? What is the thing that would make me leave this position or job?”